African Riches is a slot game focused on African nature. The five reels are located in a beautiful savannah landscape set against a mountainous backdrop. During a gaming session, you will get to experience both nighttime and daytime in the wilderness.

Examples of animals that can show up on the reels are lion, elephant, zebra, wilderbeest, rhinoceros, and cheetah.

The slot game African Riches was created by Spielo. Spielo is a small developer and it can be hard to find casinos where you can play spielo games.  At the time I am writing this you can find African riches in Betsson,  Leo Vegas, and Jackpot city casino.

The diamond is wild

Africa isn’t just rich in biodiversity – it is also rich in mineral natural resources such as precious stones. In African Riches, the diamond symbol is wild can replace any standard symbol to help you form a winning combination. It can not replace any of the specialty symbols.

The triple dollar symbol is your key to four bonus features

The triple dollar symbol is a scatter. Get at least three of them, anywhere on the reels, and you will be awarded with coins. 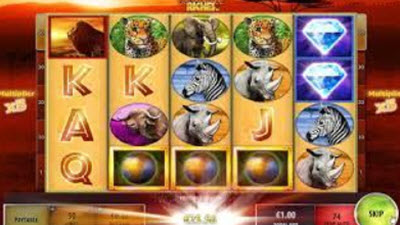 Once you have received the coin win, you will also get to choose between FOUR different bonus rounds:

Trivia: Did you know…?