Benin is bordered by Togot to the west, Burkina Faso and Niger to the north, and Nigeria to the east. To the south is the Bight of Benin, which is a pat of the Gulf of Guinea.

The capital of Benin is Porto-Novo, since that is where the national legislature sits.

However, the city of Cotonou is the seat of government and this is where you find most of the governmental buildings and headquarters of government departments.

Cotonou is also the most populated city in the country and is commonly referred to as the “economic capital” of Benin.

Compared to the rest of the world, this is low (163rd place out of 189 ranked countries) 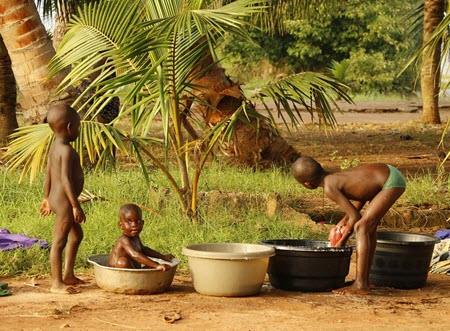 Benin is highly dependant on agriculture and regional trade, and a significant part of the population is involved in subsistence farming.

Services contribute the largest part of GDP, especially those tied to trade, transportation, transit and tourism, where Benin benefits from its location by the ocean.

Cotton is an important cash crop, and accounts for roughly 40% of the GDP and around 80% of official export receipts.

The agricultural sector is the main driver of economic growth, although in recent years, rapid population growth has offset much of the growth in real output.

Inadequate electrical supply is hampering Benin’s economic growth. The government has taken steps to increase domestic power production, but this has yet not fixed the problem.

Up to 75% of the formal workforce in Benin is represented by trade unions, but the situation is very different in the informal economy where a significant percentage of the workforce is occupied.

The International Trade Union Confederation (ITCU) has pointed out several serious and widespread issues within the informal economy, such as child labour, forced labour, and wage discrimination against women.

In 2005, it was announced that Benin would benefit from a G8 debt reduction.

Projects aiming to improve the business climate by reforms to the land tenure system, the commercial justice system, and the financial sector are included in the stipulations for Benin’s grant.

The percentage of Benin residents living under the poverty line increased from 36.2% in 2011 to 40.1% in 2015, according to data from the National Institute of Statistics and Economic Analysis in Benin.

Benin is a part of the EUMOA, a monetary union comprised of eight countries in Western Africa that all use the West African CFA franc (XOF) as their official currency. The XOF is pegged to the Euro.

Affiliations: Benin is a member of many international organizations, including the United Nations, the African Union, Organisation internationale de la Francophonie, the Organisation of Islamic Cooperation, the South Atlantic Peace and Cooperation Zone, the Community of Sahel-Saharan States, the African Petroleum Producers Association, the Niger Basin Authority, and the Organization for the Harmonization of Business Law in Africa (OHADA).