It was colonized by France in the past, and French is still the official language here, and the main language of government, business and administration. Alongside with French, the indigenous languages Mòoré (Mossi), Fula and Dioula are recognized as national languages.

The country attained independence from France in 1950, when it was still known as the Republic of Upper Volta. In 1984, it was renamed Burkina Faso and the demonym for its citizens was changed to burkinabé.

Examples of international organisations to which Burkina Faso belong:

Where is Burkina Faso?

Burkina Faso has no coastline and is surrounded by six countries:

The economy of Burkina Faso

The estimated labour force for 2017 was roughly 8.5 million.

A significant chunk of the male Burkina Faso labour force migrates annually to nearby countries to seek seasonal employment. 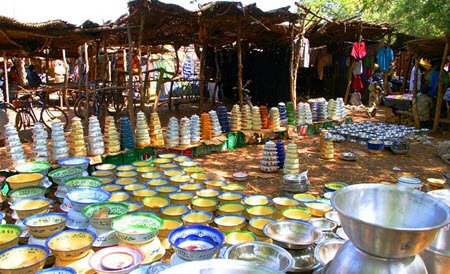 The 2017 export estimate for Burkina Faso was 3.14 billion USD. The main exports were gold, cotton, livestock, and sesame seeds.

A 2018 World Bank report stated that cotton had become the most important cash crop, but also noted that gold exports had increased in recent years.

Estimates from 2013 show that the single largest export destination was the neighbour Benin, which received more than 25% of the exports from Burkina Faso. Togo, another neighbour, accounted for 12% of exports. On third, fourth and fifth place we find destinations much farther away – Japan, Thailand, and Turkey – all receiving slightly more than 5% each of the Burkina Faso exports. Finally, the neighbours Ivory Coast and Ghana both receive between four and five percent of the exports.

The 2017 import estimate for Burkina Faso was 3.3 billion USD.

The main imports were capital goods, foodstuffs and petroleum.

Estimates from 2013 show that Ivory Coast was the main source of imports to Burkina Faso, accounting for nearly 19% of the imports, followed by the much more distant Pakistan at slightly above 18%. Other notable import partners were Ghana, India, China, and Togo – all accounting for between four and fiver percent of imports, respectively.

Burkina Faso is a part of the West African Monetary and Economic Union (UMEOA) and the official currency is the CFA franc issued by the Central Bank of the West African States (BCEAO) in Senegal. BCEAO provides regulation and oversight of financial sector and banking activity in the member states. The legal framework for bank activities was reformed significantly in 1999.

Microfinance in all UMEOA countries, including Burkina Faso, is regulated by a separate law.

The insurance sector in Burkina Faso is regulated through the Inter-African Conference on Insurance Markets (CIMA).

Burkina Faso receives hardly any money from tourism, and tourism is largely non-existent in most of the country. Several foreign countries, including the USA, warn their citizens against visiting large parts of Burkina Faso – including the northern Sahel border region and the provinces of Kmoandjari, Tapoa, Kompienga, and Gourma in the east – due to terrorism and violent crime.

Over 80% of the population relies on subsistence farming. Examples of problems facing the farmers are poor and fragile soils and highly variable rainfall.

The economy of Burkina Faso is commonly described as stagnant, although the World Bank categorized the economic outlook as short and medium term favourable in their 2017 report, while noting the economy’s sensitivity to increased oil prices and decreased prices of gold and cotton. Terrorism and labour strikes were also pointed out as notable risks.

The list of challenges includes the low literacy rate and the lack of infrastructure, including transportation infrastructure. The industry in Burkina Faso is dominated by government-controlled corporation that rarely yields a profit.

In 2017, the government still relied heavily on financial aid and foreign loans to finance the debt. Financing was achieved through a combination of concessional aid and borrowing on the regional market.

In 2011, gold production increased at six gold mine sites in the country, making Burkina Faso the fourth-largest gold producer in Africa (after South Africa, Mali and Ghana).

Examples of other elements and compounds mined in Burkina Faso are copper, iron, and manganese, as well as the tin oxide mineral cassiterite.

A report from 2018 shows that 55 tonnes of gold were exported from Burkina Faso that year, which was a two-thirds increase compared to 2013.

Senufo (less than 10% of the total population)