The Republic of Gambia, commonly referred to as The Gambia or simply Gambia, is almost entirely surrounded by Senegal, except for a stretch of coast along the Atlantic Ocean. With its 10,689 square kilometres, it is the smallest country within mainland Africa.

The country derives its name from the Gambia River which bisects it. To facilitate trade, the Portuguese established a colony where the Gambia River reaches the sea, and called the area A Gâmbia. In 1765, it became a part of the British Empire instead, and would so remain under various legal labels until 1965 when the colonial era ended and The Gambia became an independent state within the Commonwealth of Nations.

Dawda Jawara ruled The Gambia from independence to 1994, when Yahya Jammeh seized power in a coup. In 2017, Adama Barrow became the elected president of The Gambia. Jammeh refused the accept the result of the election, and his refusal to step down prompted a military intervention by the Economic Community of West African States.

Economy of The Gambia

Poverty
Data from 2015 showed that almost half of the population lived in poverty. The percentage of people living in poverty is significantly higher in rural areas than in urban ones. 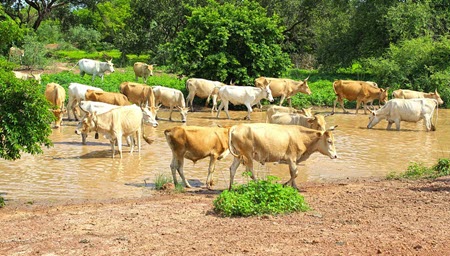 The Gambian economy is dominated by farming, fishing and tourism. A large chunk of the population rely on subsistence farming. Data from 2007 show that agriculture employed about 70% of the labour force, while accounting for less than a third of the gross domestic product (GDP). Services accounted for nearly 60 percent of GDP and industry for less than ten percent. The manufacturing industry that did exist was chiefly focused on processing agricultural products, e.g. processing peanut, baking and brewing. Other examples of manufacturing activities that existed in 2007 was soap production, soft drink production, and clothes production.

Traditionally, peanuts has been a very important cash-crop for Gambia. In 2007, peanut production accounted for slightly less than 7% of GDP, which might not sound much, but all other crops combined accounted for just 8.3% of GDP. Livestock made up about 5% and fishing less than 2%.

The United Kingdom and certain other parts of Europe used to make up a huge part of the Gambian export market, but in the 21st century, Gambian products have also began to reach significant export markets in other parts of the world, especially the United States and Japan. Also, the neighbour Senegal has become a very important trading partner for Gambia – even more so than Guinea-Bissau and Ghana which used to be the most important African export markets for Gambian products.

Examples of significant import countries for The Gambia are the United Kingdom, the Ivory Coast, China, the Netherlands, Denmark, the United States.

Strategically located on the Atlantic ocean, Gambia has a flourishing re-export trade.

Gambia is known for its low import duties and minimal administrative procedures.

The Dalasi (GMD) has been the currency for The Gambia since 1971.

National Assembly of The Gambia

Daylight Saving Time is not observed