The Republic of Mali, commonly known as Mali, is landlocked country in Western Africa. With an area of over 1,240,000 square kilometres, it is the eighth-largest country in all of Africa.

The registered population at the 2018 census exceeded 19.3 million people. Many different ethnic groups inhabit the country and a wide range of languages are spoken. The official language is French, while the indigenous Bambara language is widely spoken as an unofficial lingua franca. Roughly 80% of the population speak Bambara as their first or second language.

Mali achieved independence from France in 1960. After a long period of one-party rule, Mali became a multi-party state in 1991. The years 2012 and 2013 was marked by armed conflict within Mali, including a Tuareg rebellion in the north and a military coup in the capital Bamako.

Mali is a landlocked country that borders to seven other sovereign states:

The two main sectors of the economy are agriculture and mining. Data from the first decade of the 21st century showed that back then, the service sector accounted for just 15% of the work force.

From the late 1980s to the mid-1990s, Mali carried out major economic reform work, encouraged by the World Bank and the IMF. Many public enterprises were privatized or partially privatized, and at least 20 were simply liquidated. The reforms resulted in noticeable economic growth and reduced the government’s financial imbalance. In 1995, Mali joined the World Trade Organization (WTO). 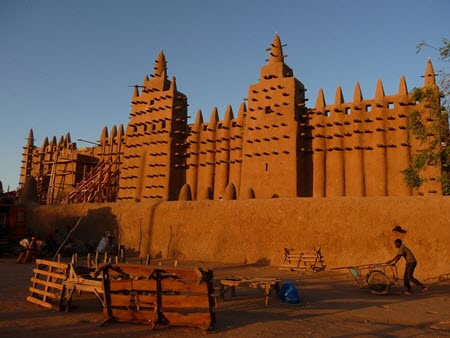 Agriculture is the key industry for Mali. Data from the first decade of the 21st century showed that back then, roughly 80% of the Mali work force worked in agriculture.

Due to seasonal variations, many agricultural workers in Mali are seasonally employed.

The largest export crop is cotton, which is exported chiefly to Senegal and the Ivory Coast.

Examples of other notable crops are rice, millet, corn, and tobacco. Various vegetables and fruits are also grown here.

In the early 1990s, Mali relaxed their mining regulations, which succeeded in increasing foreign investments. By the late 1990s, gold had become Mali’s leading export product, and this helped mitigate the effects of the cotton crisis as cotton prices plummeted in 2003.

Examples of other natural resources that are abundant in Mali are kaolin, salt, phosphate, and limestone.

Gold is mined in southern Mali.

Mali is the third-largest gold extractor in Africa; only South Africa and Ghana extracts more gold per year.

A substantial part of the electricity consumed in Mali comes from Mali’s hydroelectric power stations. The electricity infrastructure is maintained by the Energi du Mali (EDM).